Problems with Mozilla Firefox crashing my system if I try to do something complex or simply interactive. Offline and chafing to get back and post my online diary, resume a habit as necessary to me as morning tea.

It was a momentous week with local elections, a massive loss of support for the African National Congress, the party of Mandela, a party many of us joined and fought with in the Strugglle against apartheid. History doesn’t live on outdated loyalties – now there is widespread corruption, incompetence and the Sate President widely viewed as a crook, a rapist, a tyrant. All the same, the results were startling – the major metropolis centres voting for an opposition party.

And as President Zuma announced results with his usual bland disregard for criticism, four young black women stood up front with placards reminding everyone of the kangaroo court that acquitted Zuma a decade ago when he was charged with raping the daughter of his friend, a young woman known as Khwezi forced to flee the country and live in exile. The protesters were hustlled off-stage by the President’s security henchmen and roughed up. But the silent protest electrified South Africa and those following the elections.

So, it was a week of change and turbulence – but evidence again of the way democracy works, that people are not fooled by political grandstanding or threats, that votes do matter. 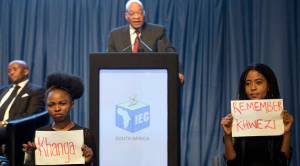 Protesters hold up papers protesting against President Jacob Zuma, at podium as he delivers a speech at the announcement of the results of the municipal elections in Pretoria, South Africa, Saturday, Aug. 6, 2016. The protest refers to Zuma’s acquittal for rape in 2006. (AP Photo/Herman Verwey)

6 comments on “Back online”